We left before 8:00 again and made sure we were dressed for the cold passes to come. 50 miles later we paid $20.00 per bike to get into the park. The ranger told us that there are a couple of buffalo’s toward the top and one has an attitude. He suggested that we not stop to try to take his picture. If I were a buffalo, the rat bike might look pretty good, for a change of pace that is!

Less than a mile into the park, we came across two slowly meandering buffalo just minding their own business. They were walking the same way we were going and right in the middle of the lane. As the few cars in front of us slowly passed them, they were still not bothered by that. When I got almost next to them, they started to increase their pace to a slow gallop and were looking directly at me. I wasprepared to do some sudden acceleration, but I did not want to freak em out as Joni still had to get by them too. All was good that time and we were able to keep going. A short while later, a lot of cars were stupidly stopped in the middle of the road, trying to get some pictures of 3 big horn rams who were grazing just up the hill from the road. I ziged and I zagged through the cars and the people and Joni followed. As I accelerated, Joni noticed the biggest of the three put his head up majestically, as he tried to see what was making that new noise. We rode off to see what our next obstacle was to be. 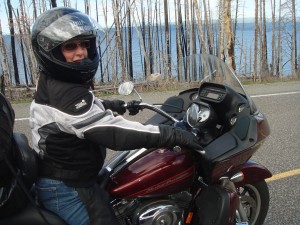 As we neared the top of the first pass, snow was piled up on both sides of the road about 6 feet high. It was so close to the road that it would have been unsafe for a picture ( I recon that would not stop a vehicle driver however). We came across two more buffalo who figured that they owned the road. Yep, they could have it, as long as they left us a little room to ride by them, it was ok.  Another safe drive by and we crested the pass and started down. The next big critter was a cow elk who crossed the road just in front of a few cars in front of us. You would have thought that the people in cars have never seen an old scruffy elk before. You guessed it, another weave in and out between the cars that just stop in the middle of the road, and some rapid acceleration by me which more than likely made the elk go a little faster into the brush…. 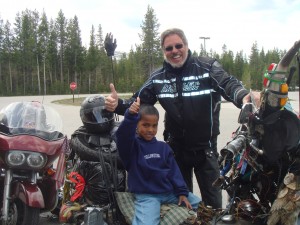 The lake still had a lot of ice next to the shore, as we were told that this years winter weather was slow to disappear. We took the route to get out of the park through the south side. We had to stop for gas and we got a couple of hot drinks. There were quite a few tourists who wanted to get pictures of me and the bike. I let a few kids sit on the bike for their folks to take pictures. The one’s that would let their kids get close to my bike, that is! People are funny, especially 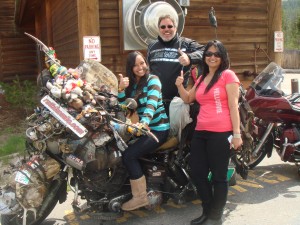 the ones that have a pre concieved idea of what I and my bike might be. They just assume, and give me a wide bearth ,as they try not to notice me as they hurry their kids along…. I feel kinda sorry for those kind of people (NOT), the ones who do not want to engage in conversation, or ask what the bike is all about. Luckily, there are many more people who really apreciate me and my bike for what it is for, entertainment and to put smiles on peoples faces. One kid after he got off of my bike from his turn sitting on it said, “I sure wish I could get a ride on this”. Sorry kid, no room for any one else. 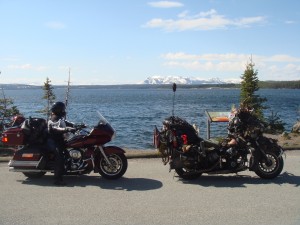 Back on the road and heading south, we stopped for a couple of back ground pictures of the beautiful smow covered white capped huge mountians. The beauty is everywhere, but I’m good seeing it at 40 miles per hour most of the time. We found it a challenge to pass a lot of the looky loos as you never could tell when a sudden left turn, without a turn signal, is in the minds of the cage drivers. We finally got out of the park and found the next park which was the Grand 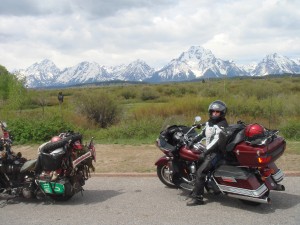 Tetons. What an awesome mountian arrangement they are. They seem to give you a different perspective every time you look over at them at 40 ro 50 mph.

We rolled into the town of Jacksom Hole and found a very crowded tourist town. Joni wanted to stop, and be a tourist for a while, so we parked and walked around. We ended up in the Silver Dollar cowboy bar. There are over 2,000 silver dollars on the bar in a clear coating. They are all 1921. Joni and I both remember as kids, getting to come in for a look at the bar, which was built in 1950, when our parents stopped there during a family vacation. We strolled into a few more shops (I mostly just waited outside), until it was time to ride into yet another large storm that loomed ahead of us. On our phones, the weather bug elite, it showed a huge mass that takes over eastern Oregon & western Idaho.

We made it to our next gas stop and found the leading edge of the next storm. Back on goes the rain gear. We headed down 89 until we found 26 west. That took us to Idaho falls where we then picked up the interstate. We handled the heavy rain and lots of wind till we called it quits in Burley, where we got to a motel for the night. Joni told me that I had NO headlight or spot lights on at all. I will check into that in the morning……..