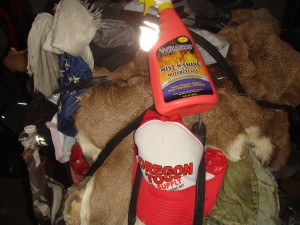 Our stay in The Feallock house bed & breakfast was super. Thank you for everything Jan! We went to breakfast at the VFW post 2536 for another breakfast that was provided for us. There were many more bikes and I saw Larry & Teresa from Michigan. Tereasa told me that her son loves his rat bike Milo T-shirt that I gave him last year. After a lot of presentations we were on the road a little after 8:00. It started raining right away. Joni & I did not have our rain 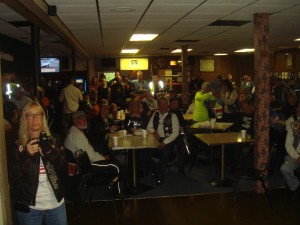 gear on, just our leather chaps and leather Jackets. It didn’t take me too long to realize what a bad decision that was for the both of us. At least I had my full face helmet on. Joni had her half helmet on. We were about 1\3 of the way back in a 100 + pack of bikes. We were getting pounded on as we were traveling south on a small 2 lane country road. All of a sudden, between the fogged in face shield, a train appeared in my vision as we also saw a lot of brake lights come on. As 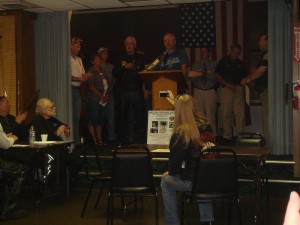 soon as we stopped for the train, I jumped off of my bike and got Joni’s full face helmet off the back of her bike and tied the other one on the back of her bike as she was swapping them over. Just as soon as all the bikes in front of us had moved to proceed, Joni was ready to go. Perfect timing. It wasn’t 2 miles later when the hail was REALLY bouncing off of our everything! We saw a few bikes pull over to find cover. Us ‘real motorcyclist’s’, kept going for a total of 50 miles when we pulled 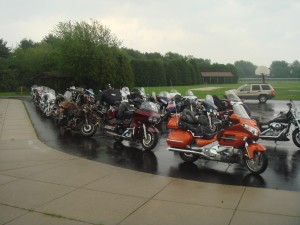 into a school where we always stop for 10 to 15 minutes to the delight of all 12 grades of kids outside waiting for us to arrive. We have a tradition of trading out the MIA/POW flag on their main flag pole with a new one every year. Just as soon as we changed it out one of the sheriff’s who was escorting us told us that there were 95 mile an hour winds and a lot of hail about 10 miles down the road where a TORNADO just touched down! They had us bring our bikes to the 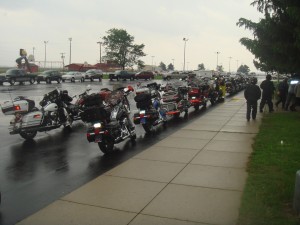 back of the school where there would be a little more protection for them. They then rushed us into the locker rooms and all the bathrooms in the school. The tornado signals were all around us. Two minutes later the report was it touched down 5 miles south of us and it took the roof off of the Con-Agra building, and was still heading right for us.  Then it was four miles out and taking down power lines and leaving them strewn all over the road. 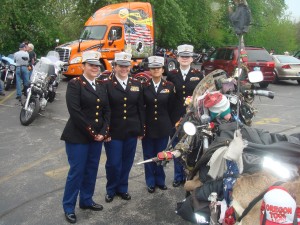 The next thing we knew, all communication was cut off. The cops could not reach anybody else, no cell phones would work and their car radios could not find any one to talk back to. I walked out of the bathroom to go outside and as soon as I got outside of the outer door a cop told me, “get back inside”! He didn’t have to tell me twice. I was bordering on the brink of excitement and fear as I saw the fear on the faces of the school staff and the cops as well. One of the school staff said they practice tornado drills quite often but this was the first time it was for real! Boy were the locker rooms crowded. I had no idea where Joni ended up. After about 20 to 30 minutes of telling jokes and me doing a video of all of us in our locker room, people started filtering out to see what is going on. We heard that 4 miles was as close as it got to us as it veered off in another direction. 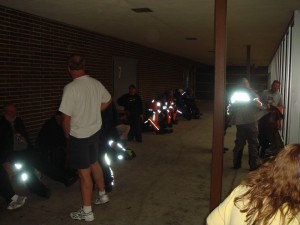 One of the cops went to check out the damage and report back if the road is passable or not. He came back about 15 minutes later and told us that the main road was a mess with power lines down every where. He drove down and returned to report that side roads were passable but they were kinda flooded and we had to go slow. So we saddled up and took off on a maze of back country roads that has us zig zagging to go around lakes that were trying 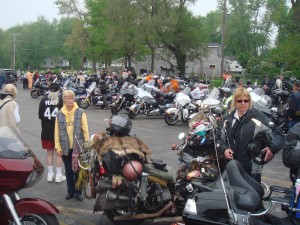 to swallow up the road. Even though the narrow road was paved there were no lines on it and we met a dump truck coming right at us and we had to get really skinny for that. A few miles later we were back on the main road and we never did get to see what the tornado did for damage. It’s just as well cause it’s is bad enough seeing it on TV. We were already soaked so there was no use in putting the rain gear on now. That is as close as I have ever been to a tornado and as closse as I ever want to be! WOW! 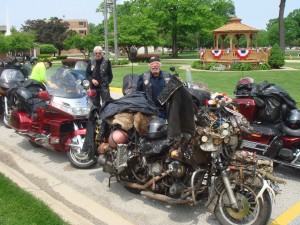 We rode for another hour in on again off again rain until we got to the Indiana Veterans home. The weather was too bad for the patients to be outside and we were already about an hour plus late from our previous situation. As we rounded the turn around I spotted Chub, and yelled hi to him as we rode by. Chub is the guy who gave me one of his dog tags on my first stop. See the story of NVAR 2006. When we walked in, I spotted Phyllis,who had a big smile on her 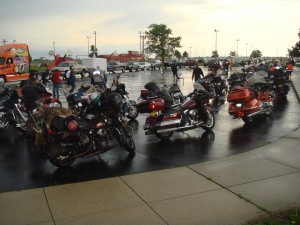 face as she spotted me coming over to give her a hug. We spoke for a while and we then went into the auditorium for the lunch. We tried to wrap it up sooner than usual so we could get back on the southern ride so we could try to out run the storm by riding east.

One thing about Indiana is the tremendous police presence for us. We are led through a county by the respective sheriff and when we start another county a new sheriff takes 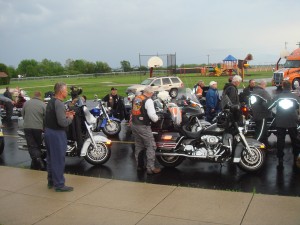 over and the last one drops off and goes back home. As we were still heading south,we stopped at a truck stop for fuel and before all of us got done, the sky just opened up and was flooding the parking lot as the drains could not keep up with the amount of rain and hail coming down. There were 5 state police motor cops waiting to escort us and we all ended up inside for about another 30 minute ‘wait out the storm’ time out. Don (doc) went back to the motel to get something he forgot and while he was trying to catch us he got behind a lady who slowed suddenly to turn without a turn signal. Don was faced with a choice, plow into her car, or lay the bike down and miss the hard impact. He slid and wrecked his bike and he got off pretty good physicallythat is. He says the bike is totaled. I told him, a bike is never totaled. Look at all the good parts still left, so what if a few parts are bent or scratched! Look at my bike! Ray picked up his bike in the trailer and took it to the nearest Harley shop and brought Don to the motel. We decided it was time to go when it 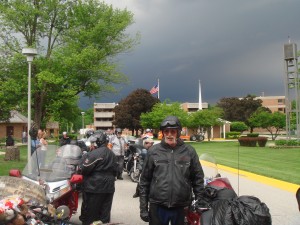 looked a little bit lighter as the big rain was tapering off a bit. When we hit the road the bike cops were stopping ALL traffic on all on ramps so we had the whole road all to our self! When we got to I-465 it was a 5 lane freeway going around Indianapolis and then went to a 6 lane. The whole freeway only had us riders in the fast lane and the cops would not let any cars do any faster than 55 mph which was the speed that they were leading us along. What a sight, only bikes and not a car or truck to be seen. It was like the world came to an end and we were the only ones left on a big open freeway! When we got to I-70 east the same thing was happening,only this time I counted 9 motor cops on Harley’s. They were having fun blasting down the open road at probably 115 mph or so to get to the next on ramp to block it for us. There had to be a few pissed off motorists as it was getting to be close to rush hour around Indy. We pulled off at a gas station for the cops to get gas and turn around and go back. We thanked them as they left, for the awesome job that they did for us. Marv and Connie from Brookville were waiting there for our arrival so they could follow us on their red trike. 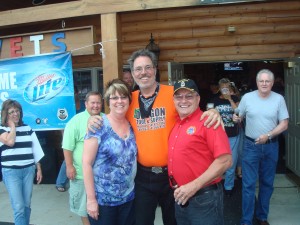 The rain had slowed a little as we went a few more miles into Ohio and then to our night stop in Brookville. We went directly to the AMVETS for dinner and a great reception by the post commander John and his wife, Lisa. Riding through town we were greeted by a lot of folks out to wave us in and welcome us to town. The town has a lot of banners, flags, and a lot of Memorial day weekend decoration in the Patriotic spirit which the town should be very proud 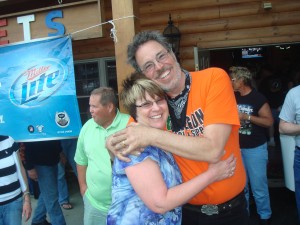 of. It was an awesome display of pride for our country. Thank you, Brookville, and everyone at the AMVETS for making all of us feel very much at home!

After dinner we went to the gas station and to our motel. Just after we got checked in, hail the size of large marbles and small golf balls very bouncing all over the place. Some riders were not here yet and probably got to see & feel first hand how that felt. We were 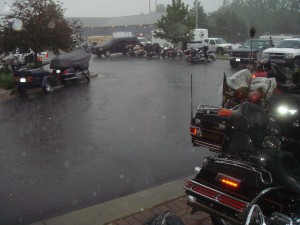 here about 20 minutes when I got a call from Headdog telling me that my friend from Oregon, Roy, dropped his bike in the intersection just outside of the gas station. A few guys saw it and said that he just washed out going around the corner. Too much throttle?  Slippery pavement? He could not stand on his leg as his knee got some damage so he wanted to go to the hospital in an ambulance. He said “I got insurance, lets go”. Headdog rode his bike to the motel and I got 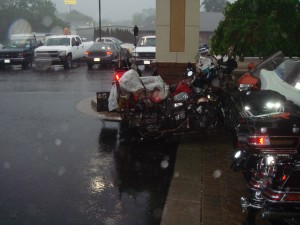 the keys for his room and took his gear off his bike and took it to the room and hung it up to try and dry out. I got Roy’s cell # from Mike, who does the registrations for the group. When I called Roy he still had not been seen by a Dr and no x-rays have been taken yet. He is going to take a taxiback to the motel when he gets done. I left his room key at the front desk for his arrival. I will let you know more as it becomes available. Big time storms outside right now still and for 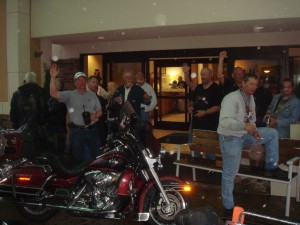 the next 24 hours as well. The news has been on nonstop for the tornado, hail, wind & rain damage. The news guys are saying they have not seen hail like this, they just showed 2″ hail that fell real close to here. It is apparently something of a phenomena around here. Tomorrow is another day. Will it be another challenging one?……..Xenia just showed softball size hail in a news gal’s hand. That’s big!

One Response to Tornado Day 9 Michigan City, In to Brookville, Ohio