When I got up this morning, little did I know that this was to be my most personal special stop of the whole trip. After the riders meeting we got on the road at our normal time of 8:00. We had some more new riders join us and the group is looking pretty good. After 112 miles of warm riding weather, we got off at Marseilles, Illinois. This is where Jim Hovious, the chief of police, took his name badge off of his uniform in 2006 and gave it to me for my bike. As soon as we rolled in today, we were greeted by Gary’s wife, Nancy and their son, Mike, and daughter, Kristy. Nancy is going on the rest of the ride with us (Gary). Kristy followed us to Morris for lunch, and Mike went home to go back to work. 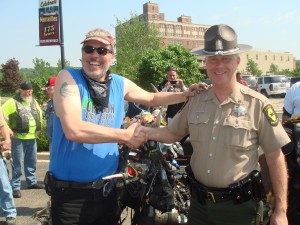 Jim was not there today, but I saw Illinois State Police trooper Craig Graham. He helped escort us in and out. He was a real easy going guy to talk too. He tried to unlock the hand cuffs on the front of my bike, but apparently they had seen too much rain as they were a little rusted up.

This wonderful town has a very awesome memorial to everyone who lost their lives in all the middle east conflicts. On my first stop there, in ’05, they had only 5 panels set up and they were not all full of names yet. Every year since then there have been more panels added as the casualties have unfortunately increased, a lot….There are now 11 panels and they are all full of names now. 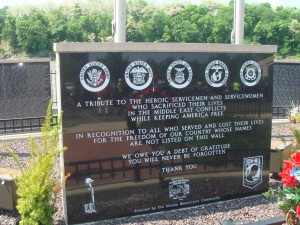 Last year I spent some time talking to Don Dombrowski, who is one of the principals who have a lot to do with the Memorial. I asked him how often do they inscribe new names. Every 6 months is what I believe he told me. I told him about the loss of a son of some friends back home in Roseburg, Oregon. I gave him David Mudge’s name, who is the son of Larry & Judy Mudge, whose life was cut short in an electrical accident while serving on board ship. He told me he would watch for it. Fast forward to the same place now a full later….. 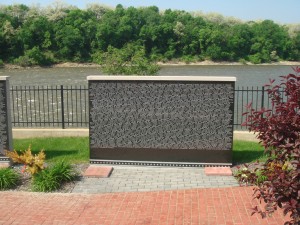 Don came up to me and shook hands and told me that he did not forget the promise that he made me last year. He reached into his pocket and pressed something in my hand as we shook hands again. It was a special dog tag that he had made for David Michael Mudge, with the panel # and line where his name is forever inscribed into the beautiful black granite panels, to be forever remembered as the hero that he was, along with all the many other heroes, who are memorialized in the peaceful river setting. I immediately went to find David’s name to take pictures for Larry & Judy. 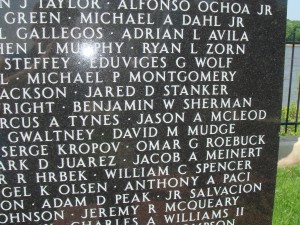 I found David’s name on the far panel on the right side and proceeded to take a few pictures. John then took one of me pointing out David’s name. That point in time became an emotional reality for me, as I recalled when 6 of us Patriot Guard riders rode up to the airport in Eugene, Oregon in 38 degree weather to escort David’s body back home to Roseburg, in December of 2009. Just looking at all the names etched into the panels has a whole new meaning when it hits so close to 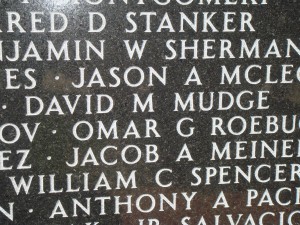 I did a radio interview with a local station there and then I called Randy at KRSB back home in Roseburg. After telling him about finding David’s name on the Memorial wall I gave the phone to Don so he could explain more about the history of the wall. All this was happening when Keith and Jenni were giving out certificates of appreciation to all involved in the stop here. We also had the 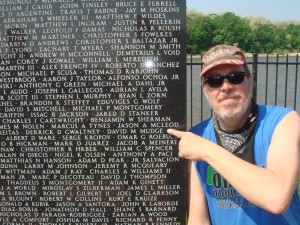 privilege to speak with a few older Veterans who were seated up front for the ceremony. Our group did a wreath laying at the main panel to pay respects for all those who given the ultimate sacrifice for our country. Thank you DavidM. Mudge, and all of you other brave souls whose names are there for all to remember.. 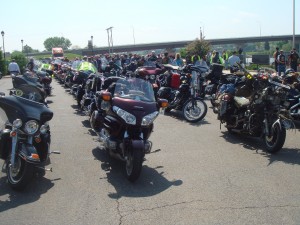 set up for us. Thank you Julie and John, for all the deserts you had for us too.

On the road again to go to watch the JROTC program that the kids have planed for us at the Portage High School. We were late getting there, even though we has the Indiana State Police escorting us, they could do little to help out when on I-80, 2 lanes are going into 1 and traffic had us STOPPED & stalled for about 45 minutes. It was move a few feet 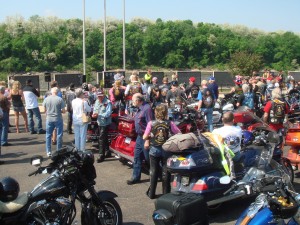 and turn off the bike, repeat the procedure for another few miles and we finally got there.

The kids did an excellent job of their rifle drills and their unarmed drills too. After watching a shortened program of about 45 minutes, we then put POW run pins on all of them. We thanked each and everyone of them as we headed out to the bikes. The temp dropped about 20 degrees it seemed, and we dressed a little warmer for the last 20 mile ride to Michigan City, Indiana. 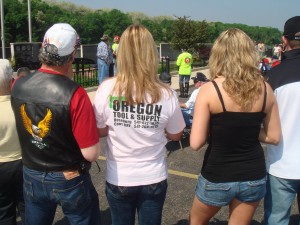 We pulled into a gas station wherefire truck and a lot of other riders were waiting to do a parade ride through town. We ended up by the southern shore of lake Michigan, where we went to the Danny Bruce memorial to do a wreath laying. We then went to the St Joseph club for a full blown dinner layout. Gary & Nancy, and Joni and I went to a very cool  bed & breakfast owner by Jan, who is a super gal. The houses were made in the late 1800’s and have a lot of nice old fashioned charm. This is the 3rd time that I have stayed here. We are getting a chance to do laundry as I am doing this day’s episode. Stay tuned, clean clothes and a new day tomorrow….. 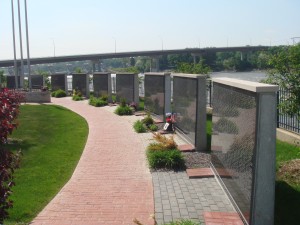 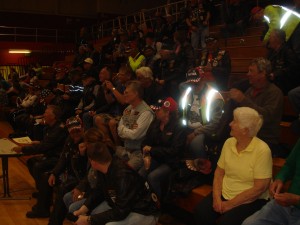 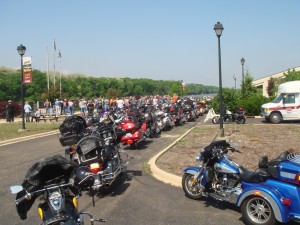 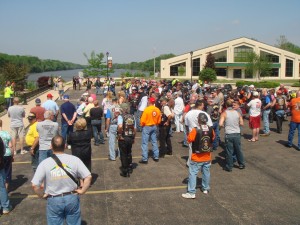 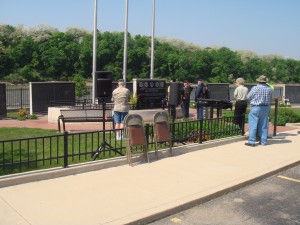 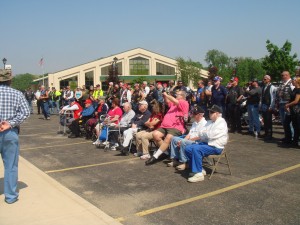 One Response to Day 8 Davenport, Ia to Michigan City, Ind