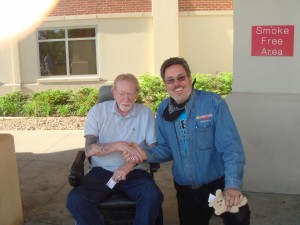 It was another ‘up early day’ to go to another location for breakfast at the AMVETS post #2. They had a very good breakfast provided for us. We were joined by some more new faces for the rest of the way to DC ride. We were escorted by two of the Polk Co. Sheriffs a whole 5 miles through town to our first visit at the VA Medical center. When we pulled up we had too many bikes to park up front so we wedged all the bikes into 3 rows in the isles of the parking lot. As we walked up to greet the Vets outside I saw some familiar faces from last year. I was talking to one guy in a wheelchair named David Folsom. He was in Special Forces in Nam ’66 through ’68. When he got out he settled in the Oakland Calif area. I told him that is where I was born and lived for 21 years before moving to Oregon. After seeing the 1% tattoo on his neck, I asked him with who. He told me he has been a Red & White for over 40 years. He still has his ’52 (I think, maybe ’53) pan head that he has had for over 40 years as well. He told me he has a trike that he can still ride when his MD doesn’t hold him back too much. We talked for quite a while and he rolled over to see my good old shovelhead. He also told me he was blind in one eye but he still has a lot of spunk. Thanks for spending time with me David.

I called Randy, a radio DJ with KRSB back home in Roseburg, Oregon, and gave a live report on the latest happenings with our NVAR ride. He said those radio reports that I call in to him have a lot of positive comments after I get done up-dating everyone almost everyday. Rhonda showed up with her therapy dog as she works with the vets putting smiles on their faces too. We met up with Rhonda yesterday as she rode with us for a while. Joyce, a hospital employee, was quite impressed with my bike and she took some pictures and wanted a group picture of all of us. I helped her into the back of a pickup in the parking lot, and she got a few group shots. There were a lot of Vets who came out as the weather was the best we have seen ALL YEAR! At least all week anyway….

We were escorted by the cops again to I-80 for a short while and we took a few back roads up to Marshalltown to the Iowa Veterans Home. On our way riding through the rural Iowa countryside, the neatly plowed brown fields were just starting to show signs of slightly green growth of the new born corn stalks. In just a few weeks it will look like a fertile green painted picture filling in the landscape. The farm houses look to be quite old but very well taken care of. I can imagine some one’s great great great grandparents homesteading their 640 acre plots a couple of hundred years ago. Oh how time must have have been very different before motorcycles! As we got into Marshalltown, it was apparent of the timeless rich history of the town in the architectural design of the buildings and the town layout. It is a very cool town to ride through, with freshly groomed lawns and neatness everywhere. 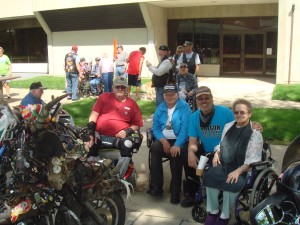 When we pulled into the home they has a LOT of veterans waiting for us. there was only enough room to pull half of the bikes up on the sidewalk for them to view. Guess where the rat bike ended up? Yep, the half that was on display for them to see. A lot of them came over to me and said they were glad to see me and the rat bike back again. There was a gal named Bonnie, who was very cool to talk to and she got the closest to my bike without actually getting on.  Next 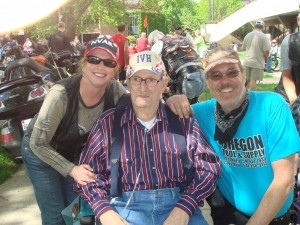 we spent quite a long time talking to Joe. He was in the Army in ’51 & ’52 while stationed in Germany. He told us when he was discharged, he got into riding motorcycles. He had an old English bike and the only way he could get it started was to pull it with a rope behind a car. He also told us he was a bull rider and a bronc buster. We were impressed with all that and Joni asked him why he wanted to ride bulls. He said “cause my dad didn’t want me to do it”. He is quite a fireball. He said in them days they would use a suit case handle tied to the bull. It wasn’t like this new fangled way that these young bull riders do it now a days!

Bob was the next story teller. He was a B-47 bomber pilot in ’57 and they tapped him to be the test pilot to see how there bombs would deploy when the plane hit 66 1\2 degree up angle. He would sweep in real low, below radar, and then pull up a fast as he could and the bomb doors would open and the bomb would automatically get lobbed out during the ascent. If they were lucky, the bomb would go off before they got too far up in the sky as the shock wave would be tolerable. He was very proud to be talking about his accomplishments and rightly so. He was a real neat guy to talk to. Then there was Ray who has his 90th birthday today. He must be a real wild guy as they had what looked like an old fashioned football helmet to protect his head. 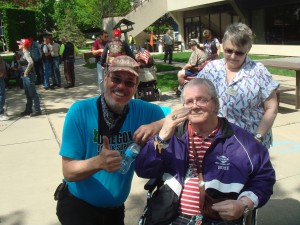 Buzz was a Navy seal who said he has his gun all oiled up and was ready to be sent in to get Bin Laden. But alas, they never called him to task. He said he would have loved to have went on a mission like that. He was in Korea when it was 67 below zero and he was in Nam in ’57 when he was discharged. Wow there were a lot of historical stories to come from the minds of those veterans.

Lunch was provided for us inside and I phoned in a live report on KGRV radio in Winston Oregon. Then it was time to do more back roads in the south east direction to get back to I-80′ More rural beauty, not often seen from the interstates.

Our next fuel stop was at a truck stop and was a quick gas and go. The next stop was at the Iowa City VAMC. We all went into the hospital as there were no patients to be able to come out. We spent an hour and a half going from floor to floor and got a lot more stories and saw a lot of happy Vets to be able to have someone to talk to. 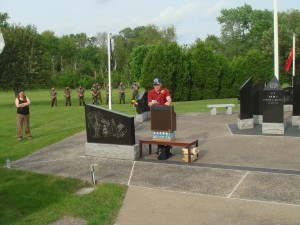 Back on the road for a few more miles and we took an exit only to get right back on the highway again. That quick  off & on was to pick up about 50 or more riders who were waiting to join us for our ride into Davenport to the All Veterans Memorial in the middle of a beautiful cemetery. I again saw a lot of friendly faces that I have seen in years past. Frank, who did the whole ride last year, was looking pretty good for having his shoulder operated on 2 weeks ago. Pam was as friendly as ever. Actually everyone was as friendly as ever! Thank you 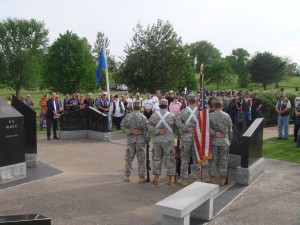 We then rode to the American Legion Post #26 for a super dinner that was provided for us. Then it was over to the motel where there was time for me to hit the warm hot tub. Breakfast here tomorrow am…… 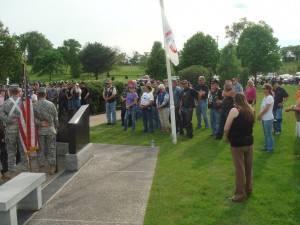 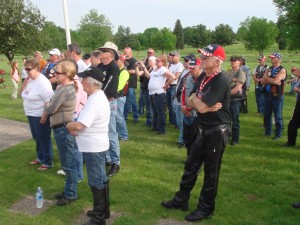 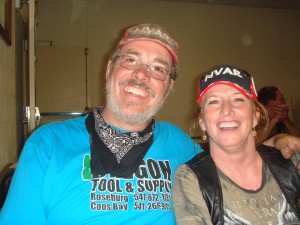