We did not have far to go for breakfast and the riders meeting. The motel actually had great beds for a good nights sleep. The continental breakfast was better than a restaurant, this time. We were joined by a few more riders to go the rest of the way to DC with us. The shy had a giant black streak going north east that looked all too familier. It was going just fast enough or we were going just slow enough that it missed our exact route! In other words, it was our first FULL DRY DAY! The after noon brought out my sunglasses for the first time on this journey. 88 miles into the day was our first gas stop. We were joined by a few more riders as we hit the highway once again. 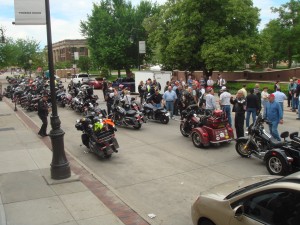 65 miles later brought us into Council Bluffs, Iowa to Bayless park. There is always a great welcome waiting for us there. They have a beautiful Memorial display for all the wars and the fallen Iowa Veterans. A few people spoke after we all sang the Star Spangled Banner, and said the Pledge of Allegiance. We then walked across the street for a pulled pork BBQ that was provided for us at the Masons lodge. It was a fantastic lunch and they even donated $600.00 for 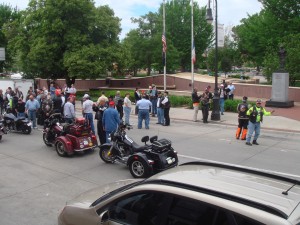 fuel for the chase truck. What a great stop! Before we left a lot of American Legion Riders showed up to ride with us for a while. We left Council Bluffs with well over 70 motorcycles. Our line was fairly long as we proceeded to go another 40 miles for another fuel stop.

I saw a lot of friends from past runs in the new group of riders. We rode 46 more miles to the Freedom Rock, that Ray (Bubba) 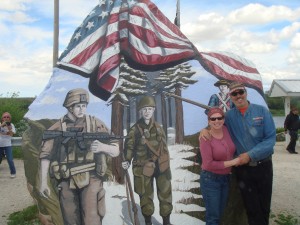 Sorrenson continues to paint an ever changing patriotic war scene on a big quarry rock. He even mixes ashes of fallen Veterans in the paint to blend into his masterpieces, when asked to. One year a WWII Veteran came by and saw 3 punk kids vandalizing the paint job. He got out and beat the heck out of all 3 of then. Of coarse the judge had to find him guilty (only the bad guys have rights, it seems), and fined him one dollar!  Ray was not here for us to talk to this time, 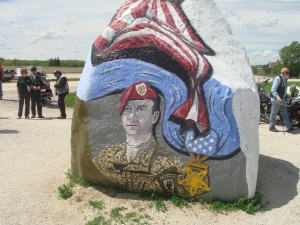 but we have seen him there in action a few times in the past. Our group usually donates some money to him for paint and supplies. We had the pleasure of seeing Jenny, Blue Light, there to ride with us. Her HD Tri-Glide is a very good looking, red glistening trike, that is only out shined by her glowing personality. 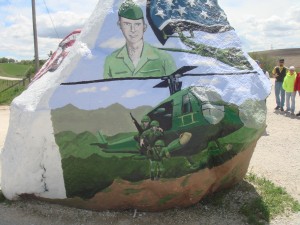 the Iowa Veterans Cemetery that was 27 miles down the road. We were there last year for the dedication of a new Vietnam Veterans Memorial. Our guys did a wreath laying at the memorial and then we went down to Michelle’s nitch and laid another wreath for her too. Michelle left us in 2009. She was on this ride a couple of times in the past, which is where a lot us us knew her from. The cemetery was laid out in 2006 and looks very empty compared with a lot of cemetery’s that we have visited.

The last 17 miles brought us into Des Moines to the Paralyzed Veterans of America club. They had pulled pork and brisket and chicken that was provided for us too. It was getting kinda warm out. It was something that we have not had much experience with so far on this trip. A few of us left to go to our motel and relax a bit early for once. We hit the gas station on the way and when we got to the motel, we saw Einer, another friend from Norway. He will join us for the rest of the trip. Svein and Einer are both very neat guys to be around. Joni and I hope to get to Norway soon to ride with them as they have offered to show us around Europe. No the Rat bike would not be going, even though that might be a cool thing to do.. 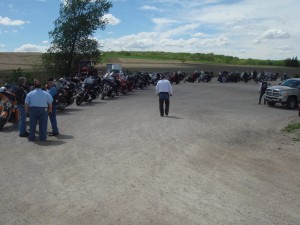 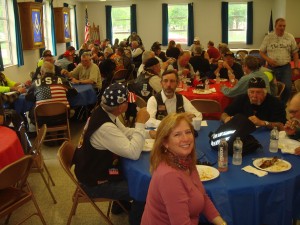 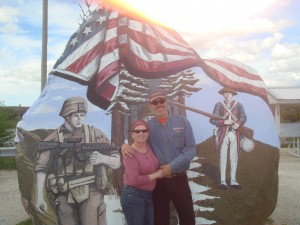