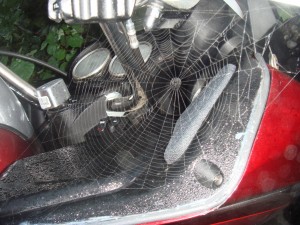 We got up at 5:30 to try to get to town for breakfast at 7:00 to meet with Don and his friends. It sometimes takes a little longer when two females are involved. As I was getting the bikes moved around, I noticed a spiders handiwork on Joni’s handlebars. Our bikes had only been parked there for less than 12 hours. I have no idea where the spider was but his web was very concentric looking, for the short amount of time that he had to get it done. 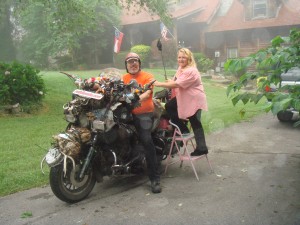 Helen getting ready for a ride

It was very foggy out when I had Helen get on my bike for a promised ride before we depart. Helen had to get a step stool to get up on the back seat as it was not favorable to short legs with ALL the stuff that she has to get around. I put a couple of her pillows there, one to sit on and one for her back, to make it more comfortable for her. We went down the road for a few miles and when I turned around I opened it up a bit for her. She was screaming something about NO WHEELIES. I told 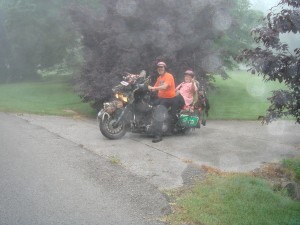 her that was not a wheelie, but 93 inches of fun power kicking in! She said it was a very comfortable ride and she would have been disappointed if I didn’t take her for a ride. We finished packing and followed her, her battery was charged up by time, to the Stars & Stripes, which is a very cool little hometown restaurant where Don Wright was having breakfast with some friends. Yesterday he told me he wished he had known us then, because he would have liked for us to ride in to show his friends my bike. I told him we would be there tomorrow. When we rode up it seems that we were the hit of the town. I reckon that he warned his friends that we would be coming by with a kinda unique motorcycle. 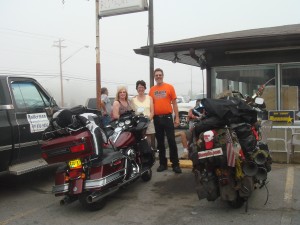 We were greeted by a bunch of guys outside and when we finally made it inside, Don introduced us to Jim, Rick, Bill, Paul, Beverly and his daughter, Candace. The state historian for Tennessee, Walter Durham, joined us a bit later. I know that Walter has a wealth of information tucked away in his memory banks, as he has undoubtedly been doing that for a number of decades.

I talked with Rick a lot, and learned that he has a 2002 Road King (I think) and 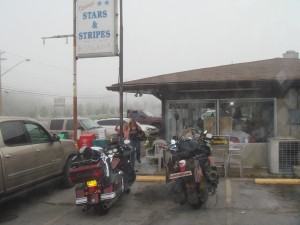 he told me of a ’59 pan head that he rode for a long time. It might have been a little early in the morning for Rick as he had his t shirt on backwards. We had a very good breakfast, and after saying goodbye to everyone we followed Helen to Hwy 25, a small county road to head north-west on. We noticed that everyone must be in a lawn mowing competition, as everywhere we looked, someone was on a small riding mower. Some places looked like they were just mowed and they were doing it again? The land is very fertile with a lot of beautiful shades of green every where you look. The trees arch over the road and it seems like they beckon you to ‘come on down, neighbor’. It was a very relaxing, gently sweeping, road for our first morning jaunt of the day.

When we got to the interstate, Joni suggested that instead of county roads, we take the interstate to Morgantown, Kentucky, which is where we were going next. Joni had done a lot of research on ancestry of her Beesley family history. A lot of it led her to Morgantown. Instead of looking at the map, I figured it could not be too hard to get where we were going. WRONG! About 20 miles up the road, we should have got off onto another interstate. We finally pulled over after about 50 more miles when I did not recognize any of the names of the towns that we were coming up to. After I turned the map over, I discovered we were almost all the way up to Elizabethtown, which was almost up to Louisville. OOPS, I have the map. I have the GPS. Guess whose fault that was?

We headed back down south for a ways and took a small county road back west through the Mammoth Cave National Park. All things happen for a reason. What a beautiful ride it was for the next couple of hours. I even enjoyed the park cop who turned on his overhead lights and pointed at me, as we crossed paths in opposite directions, and signaled for me to slow down. That’s as far as it went, as we then rode a bit slower until we got out of the park. We finally got to Morgantown at 11:30. We should have been there around 9:00…… 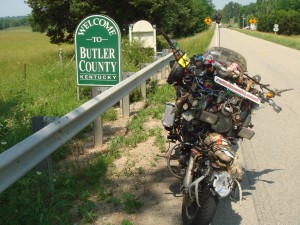 We found the courthouse on our own and went to the county clerks office. We were greeted by some very helpful gals, and Natasha took us into the back room of ALL the records. They told us they had a fire on the early 60’s and did not save all the records. Well they had records back to the early 1800’s. Joni found the original signatures of a marriage license from 1816 that was part of her heritage! The more that she looked, the more that she learned. It 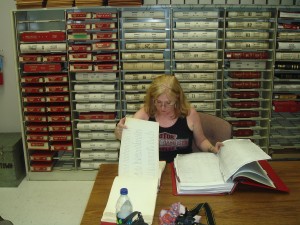 was very cool how they let us help ourselves to any books that we wanted to pull out and look at. Joni made a few copies of some of the pages and I went out to find us some lunch. I came back with a couple of burgers and found another couple looking at records too. They were very funny as every time that she found something, she told her husband Bill to see what the property deeds said about the transaction. He told her that their family sold 125 acres for a dollar an acre. Well you can imagine the comments that came next…..A dollar an acre? They ought to be shot! They probably were back then,  eventually for some people that is…..

Meanwhile, it was getting close to 3:30 and they close at 4:00. What a relief it was for me to find out that they weren’t open till 5:00!! Little did I know that the library was next. We walked over to it and found the old time town founders book section and Joni buried her nose until 4:40 when we were told that they had to shut down the computers and close. We had a few copies made there and our next stop was to find an old graveyard that was supposed to have some Beesley’s there. Especially one from the Revolutionary era of the late 1700’s.

We took a lot of back woods roads and about a half hour later we hit the end of the road. A guy came out of the last house that was there and said, ” I’ve lived here all my life and there ain’t no graveyard back here. There is an old oneback up the road a bit. You got to go down a gravel road past a house and ya’all might find it. But watch out for snakes! We parked next to a house on the blacktop and asked a gal there if we could leave the bikes there and walk to the graveyard. Joni wasn’t about to do any more gravel riding than she had to. It was not too far of a walk in the swealtering heat. It was a neatly mowed graveyard that had a few new head stones there and some from the late 1800’s. There were a few rocks spaced kinda in an orderly fashion, as if marking the spot for someone. I guess when they planted someone there, at the time a rock was good enough. They probably figured that they would remember who was there. Well guess what? T’ain’t ’round either no more, so who is burried there anyway??

When we got back to our bikes, the gal came out of the house and told us of a place in Caneyville where she had just called, and found a Beesley there who does family history. I guess that I didn’tlisten good enough to her directions and we found ourself’s on a never ending back road with no signs, no numbers or no clue of where we were at. No my GPS did not help me any at all. Fuel was becoming an issue too. We finally accidently found Caneyville coming into it from the oppisite direction than where we were told to get there. A quick stop for fuel and then a ride across the street to find Sue. She was not at work then but a gal working there called her for Joni. Joni got another phone # to call later to get more family history. 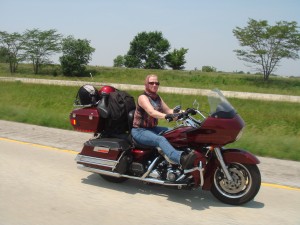 We were right there at the Western Kentucky Parkway so we figured it was time to ride toward the setting sun. Shortly it was time to go north on another Parkway to got to Owensboro. It was getting a little difficult to see with our sunglasses still on. We went another 30 miles into Henderson where we pulled into a motel, just a few miles shy of Evansville, Indiana.