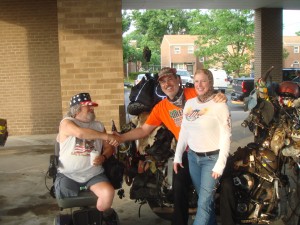 Joni & I got up and saw a few people downstairs that we were able to say good by to. Everyone else had either left to ride home or left to ride to the Pentagon Parking lot to stage for the Rolling Thunder XXIV protest parade. We were on the road at 7:30. Gary & Nancy were going to take a different route and be back home in Gurnee Illinois, just North of Chicago, in a couple of days. They (Nancy) still have a lot to do for the preparations for their daughter, Kristy’s, wedding on June 11th. We are going to be there for it after our South Carolina visit with Russ & Kathy, Joni’s parents.

We had a pleasant, and DRY 550 mile ride to Joni’s parents home in Anderson, SC. It was quite a different contrast to the past couple of weeks of every climate change that we encountered since leaving home . It was 92 degrees when we arrived 9 hours later at 4:30. A short time after we got there, Terry, Joni’s sister and her husband Bobby, showed up for a very good home cooked dinner. We plan to rest & visit here for a few days before riding North West to the Chicago area.

Joni has a follow up appointment with the surgeon who did a vascular procedure on her, the middle of March, at Rush University Hospital, in Chicago. For those interested in how it helps people with MS, just google CCSVI and the Liberation treatment.

We can tell you first hand about the tremendous success that Joni has experienced since having it done. Joni was diagnosed with possible MS in the mid 90’s. She had all the symptoms and has been afflicted by MS a lot more since 2002. She has not been able to get on the treadmill for over 4 years before the CCSVI procedure was done. She has not been able to ride her horse or her Harley in over 2 years. She had to talk 2-3 hour naps every day to be alert in the evening. The headaches were always there too. She has episodes of her legs not moving for up to a week at a time and stairs were impossible. I had to carry her up stairs at home on her bad days. (see our 2008 story through Iowa)

The very next day after the procedure, she bounded down the stairs at Gary & Nancy’s house like there was nothing wrong. Her & Nancy went to the mall where Joni was able to walk faster than Nancy! They walked the dogs later and Joni still had energy to spare.

When we got back home a week later, she started back on the treadmill. Just a mile at first and after a few weeks, she worked her way up to 3 miles at 3.5 mph! She has been back on her horse and of course her motorcycle too. The naps and almost non existent as her energy level has increased a lot. What a miracle procedure for MS patients for it to treat the symptoms like it does. It is not a cure for MS, but a ‘beginning’ for MS sufferer’s to be able to better cope with their disease. Since Joni had her procedure done, 3 more people from our Roseburg area back home, have had the same thing done with very favorable degrees of success.

Please tell anyone that you might know that is afflicted with MS to check into this. The procedure is now being done at a lot more places in the US.

Seeing is believing! I am so blessed to have an energized wife back!

Joni has a follow up appointment next week on the 8th with Dr. Hector Ferral at the same place in Chicago where she had the surgery done. I recon the Dr. will be pleasantly surprised to learn of her new lease on life, including her motorcycling accomplishments, when we show up on the bikes from Oregon, via Washington DC.  and South Carolina, etc…..