We were up at 5:30 to a very wet morning. By the time we had our riders meeting at 7:30 it was not raining at the time. We left at our normal time of 8:00 and we had 38 bikes (I think). The first stop was at the border town of Wendover for fuel. It was there that I saw the smiling faces of Leon & Judy who live in Salt Lake City. They were there to ride with us. The next 100 miles saw a lot of clouds and cold but no rain! That was our fuel and meal stop and it was raining, (back to normal) when we got ready to do the next 32 miles to SLC. The 5 road guards took off the normal 10 miles before our exit to prepare to usher us off the highway and into town to go to the VA Medical center in the middle of town. The lead 5 bikes that is always the missing man formation, veered left to follow I-80. When Buzz looked left, to move the main pack over there was a truck in the way, and we all followed Buzz down I-215. A lot of us saw what was happening but stayed with the main pack as we did a BIG U turn at the nearest exit where we could get going back the other way again. We had to get on I-80 West to turn around AGAIN. We finally got to the correct exit and the road guards were wondering just where we were. It’s not easy to hide a couple dozen bikes!

The Hospital had a lot Veterans waiting by the front door inside as it was cold and wet outside. The first guy that I spotted in a wheel chair, I said “Howard right”? He was beaming cause I remembered his name. He said “your the guy from Roseburg aren’t you”? Howard taught English at Douglas High school from ’56 to ’58 in Winston, Oregon, a few miles south of Roseburg. He was very happy to see all of us from Oregon and we brought a large smile to his face. Next I saw Curtis again, and he was really looking forward to seeing all of us again. Aubry was there and wanted another picture sitting on my bike again. She does wonders for the moral of the residents. She treats ALL of them like they were her grand parents, or great grand parents? A few other gals both patients and nurses and staff alike took turns sitting on my bike for pictures. Everyone was passing around contagious smiles and it was an awesome scene. Another gal, I think her name is Maggie, was wheeling her 92 year old dad, Big Dilworth, closer to see my bike. 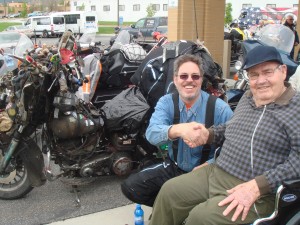 She was very excited as she kept saying that she hasn’t seen him smile like that in a long time….More feel good stories about this stop as Joni was letting male patients sit with her on her bike. We were all a big hit there. This is why we do what we do, simple little things like giving someone something to smile about where there has not been a smile in who knows how long! 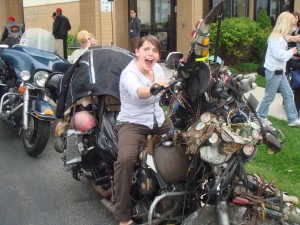 Nicole, who also works there is a ball of energy. She has worked there since 2005 and I think she said she is from Belgium? (Sorry if I got that one wrong). The patients seem to love her and her upbeat attitude. She wheeled Wanda over for a picture and 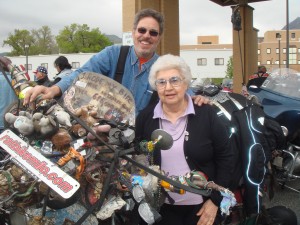 we both determined that it was for the best that she sit side ways instead of trying to get her all the way on the seat. The next gal for the picture machine was Pat. She had the look on her face of,  What the heck am I doing near this thing! Everyone loved it. 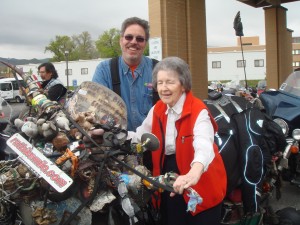 After an hour or so, it was time to do our last leg of the day to Evanston, Wyoming. We hit a lot of hail and very hard rain all the rest of the way there. When we got to town we pulled into Spanky’s bar to a very cool welcome party, where they had dinner waiting for us. We saw a lot of friends from past stop overs and it was like old home week! Then it was time to go to the motel for the night and it has yet to stop pouring. Shortly after we got to our room, Jersey John, a friend from Sutherlin, about 10 miles north of Roseburg, called to say he was in Winnemucca, Nevada. He left at 6:00 this morning to catch up with us. He is so excited about being able to finally make this ride.I’ve been telling him about it for years and he kept saying, “some year, maybe I can make it”! John, it’s your year, It will be a pleasure to ride with you. Just get your butt caught up with our group! 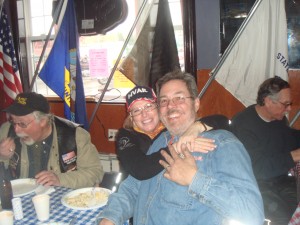 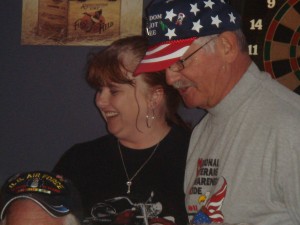