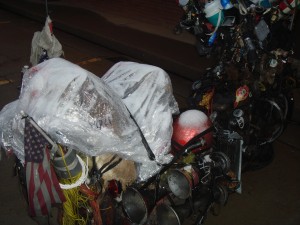 As we went to bed last night I told Joni to look out side at the bikes. Yep, they were getting snowed on! Of course you know what was on our minds as we tried to go to sleep. How much snow will there be? Can we ride? Who knows, we will just have to see what tomorrow brings. I got up at 5:30 and it was still dark out side. I could see that it had not snowed as much as we feared it might. It did rain a heck of a lot, but there was only a dusting on the bikes. Mystery solved, we ride! At the riders meeting we were told that it is snowing pretty heavy before our next fuel stop at Rock Springs. It was pretty cold, in the mid 30’s, but only wet roads and no rain as we just missed the downpour by the time we got to our fuel stop 100 miles later. We were told by some west bound travelers (in cars) that we were heading into some very nasty stuff, hard rain, hail, wind and the works. What else is new! We were prepared to catch up to the storm when we got to our next stop at, which was lunch and fuel again. Guess what? We actually rode slow enough that the storm was just ahead of us! How did that happen? Oh Yeah, Buzz is setting the pace! It’s OK Judy, he’s doing a great job as usual!

When we were climbing the first hill, we were getting up into the thick fog with the high elevation,and all I could see was the first 5 or 6 rows of bikes. The others were GONE…. disappeared into the abyss of white pea soup fog! I recon our group of bikes is like a train on the track. Every car is dependent on the one in front of it to get it where they are all going. the same is true for us. We are directly dependent on the bike in front of us to make sure all is good to get us where we are going. we crested the summit and on our descent we were finally able to get past the fog and actually see a lot more bikes in our group.

We were at our lunch stop long enough to let the storm get a head start on it’s easterly trek. We were again told how bad it was in front of us. We rode another 110 miles into Laramie and stayed dry, except for the water that the tires splashed up. It was fuel for some of us and we were met by at least 12 to 15 more riders waiting for us, to join in on our final 55 miles of the day to Cheyenne.  Where were you Noel & Yvette? I was looking forward to seeing you guys there. 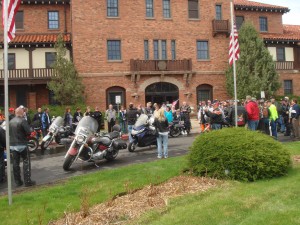 We were favored by, are you ready for this? NO rain yet. There was actually some blue skies, not very much, but a little. We were joined shortly before Cheyenne by an officer with flashing lights as he escorted us into town. We were told that our road guards could stay with the group as they have cops set up at all intersections going through town to the VA Hospital. The news camera was there to catch us riding in and our leader, Steve, did the interview for 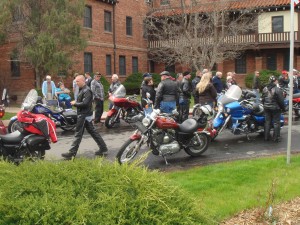 the gal. Andy, a key employee (that means I don’t remember just what it is that he does there) was glad to see all of us again. We saw a few patients that were brave enough to handle the cold out side. After a while a lot of us went inside to visit some of the other patients. We started talking to one guy who told us that during WWII, he was wounded and spent 16 months in a hospital some where over seas, and he started crying. Joni quickly told him that “you don’t have to go there now, lets stay here in the present” It didn’t work and our hearts were 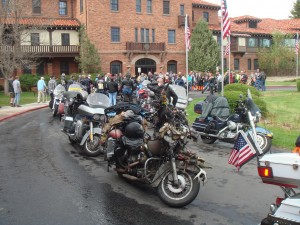 kinda heavy as we had to leave him. We really didn’t mean for that to happen, but some of the patients still have a lot of demons that have to surface from time to time. We find joy in listening to the positive stories, but we are here on this mission to take the good with the not so pleasant. 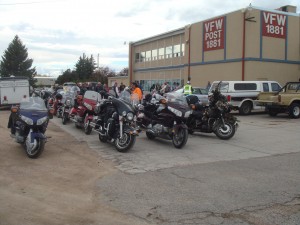 dinner. These guys and gals all work very hard to feed us with a super good meal that is different than most and they make us feel real welcome. George handed over the duties of being the eastern Wyoming state coordinator to Ron and they are both super guys with a lot of heart. Peggy is state coordinator for western Wyoming and she did an excellent job for us in her half of the state too. Thank you Peggy! 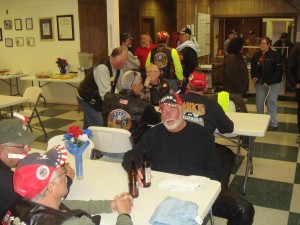 The job of state coordinator is to set up the meals, gas stops, VA home and hospital stops, cemetery wreath laying, police escorts, and the motels with a very discounted rate for all of us. It is a very big undertaking that a lot of us riders don’t have to worry about. So a huge thank you goes out to ALL of the state coordinators for all the hard work that you all do to make our journey a lot easier. Now about the weather! We were in a very long check in line at the motel with only one guy to handle ALL of us. While we were waiting, 3 gals came in to check in. It was 3 generations on their way to a bacholrette party. the grandmother, Martha, was priceless. her facial expressions had all of us cracking up, Her daughter, Lee and grandaughter, Jessica told me that I would not remember their names. Wrong! Martha told us that her dad entered the Navy in 1916 and while he was on board ship, he tracked every position of all of our ships. I sure hoped that he was on our side! We had a lot of fun with them. The next morning, Ray found this hand written note on his windshield.

“I just wanted to thank all of you for serving! It was an honor to meet most of you! Milo and the other gentlemen thank you for being so wonderful to my grandma. She talked about all of you the rest of the night! I hope you have safe travels to DC and home! I hope you will look back one day and remember that all of you brought a smile and a tearful eye to us! You warmed our hearts, safe travels, thank you again, Jessica 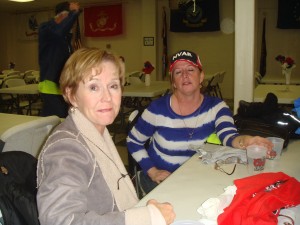 One Response to Day 4 Evanston Wy. to Cheyenne Wy.